We said goodbye to Simon yesterday. We found out about a month ago that he had a huge tumor in his belly. Being sane people and following the advice of our vet, we chose not to do anything about it. Instead we took the spoil him (even more) and make him comfortable route.

We knew something wasn’t quite right about him starting in August. He was having a hard time moving around and leaping, but he’s 16 years old and had some sort of old injury from his before us time. We thought his age and his old injury had caught up with him so we didn’t think much about it except that we worried and helped him to get up to his favorite high places. He also developed a tremendous case of the hair mats earlier in the year. He was NOT a fan of anyone touching his belly so combing them out was not really an option.

We decided to keep an eye on him and comb him more often to prevent other mats from appearing. Then the inability to leap got worse and he started losing weight. We always knew he wasn’t going to break any old age records. When he came to us, he weighed five pounds and had damaged his kidneys during his time of being on the lam. We went back and forth a few years ago about trying to get him to eat expensive, high-protein, special food. But he was NOT having it. The vet let us off the hook and we all agreed we knew the risks. Simon knew he hated that food.

It never occurred to us that something other than kidney failure would take him out. Let me tell you, making the decision to put a pet down never gets easier. Even when you know it is the only option.

Simon just wanted to hang out with the better-half. Lucy wanted Simon to play:

Simon went through a significant period of trying to either steal my chair or share it with me:

Now for his glamour shot: 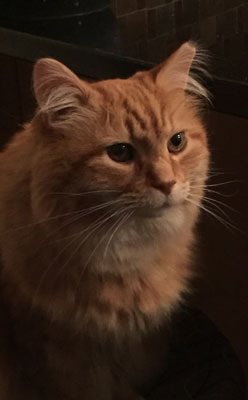 This entry was posted in Generic Thoughts. Bookmark the permalink.